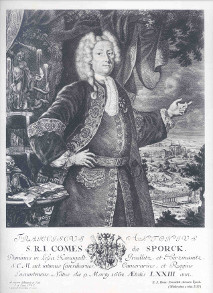 Earl Franz Anton Sporck (born 9. 3. 1662 in Heřmanův Městec or in Lysá nad Labem – died 30. 3. 1738 in Lysá nad Labem) was a noted Czech aristocrat and patron of art. He was the eldest son of Jan Sporck, who became Don for his army service. Earl Franz Anton Sporck was a great criticizer of the situation in society and promoted the idea of religious tolerance, for which he was later charged with heresy. The lawsuit stretched along for several years and Earl Sporck escaped with a fine only thanks to his influential connections. After that he became patron of art, most using services of Matthias Bernhard Braun. Earl Sporck is most known for baroque spa and hospital in Kuks and for his castle in Lysa nad Labem. He died 30. 3. 1738, burried in Kuks.
Enter gallery